The casino patron who decides to "try his luck" at the tables and the horse player who wagers at the racetrack confront what seem to be formidable adversaries. The casinos hope to have the advantage on every bet offered and, at the track, the pari-mutuel takeout of 17-25% on every bet assures all but a few will wind up losers.

As soon as he enters the casino, the player must make several important decisions, the first being: What game do I play? Even after this choice is made, most games offer additional options: Do I play individual numbers or the even-money bets in roulette? Do I stand with a pair of eights in blackj ack or should I hit or split the pair? Should I bet pass or the one-roll propositions in craps?

The horse player is offered a number of choices as well. He is usually faced with a field of six to 12 horses. He can play one or more horses to win, place, or show, in addition to combining any number of horses in the exotic or "gimmick" wagers.

All of these choices have "right" answers, if the player seeks to maximize his return or minimize his loss. They all can be at least partially solved through the use of mathematical theory. The intelligent player must have a basic understanding of the mathematics behind the game or games he plays if he is to survive financially or actually profit. There are situations where the player has the advantage. The most-publicized example, of course, is casino blackjack. The game has become tougher in recent years due to casino countermeasures, but blackjack can still be profitable for the sophisticated player. There could be several other favorable games, as the reader will soon discover.

A familiarity with basic probability will allow the alert gambler to discover those positive expectancy games and exploit them where they exist. A vast knowledge of mathematics is not required. Some of the finest poker players in the country never went to college, but they do have a sense of what makes a good poker hand and what their chances of having the best hand are after all the cards have been dealt.

I have already made reference to the concept of mathematical expectation. This principle is central to an understanding of the chapters to follow.

Imagine for a moment a coin toss game with an unbiased coin (a coin we assume will produce 50% heads and 50% tails). Suppose also that we are offered an opportunity to bet that the next flip will be heads and the payoff will be even money when we win (we receive a $1 profit in addition to the return of wager). Our mathematical expectation in this example is: (.5X1) + (.5)(-1) = 0 The mathematical expectation of any bet in any game is computed by multiplying each possible gain or loss by the probability of that gain or loss, then adding the two figures. In the preceding example, we expect to gain nothing from playing this game. This is known as a fair game, one in which the player has no advantage or disadvantage.

Playing this game 100 times would give us a positive expectation of $25.

The two examples presented thus far are admittedly simple, but often this type of analysis is all that is needed to evaluate a proposition. Consider the "dozens" bet in roulette. Our expectation for a $1 bet is:

As another example, suppose that on the first hand of four-deck blackjack the player bets $12, he is dealt 6,5, and the dealer then shows an ace up. The dealer asks the player if he wants insurance. This is aseparate $6 bet. It pays $12 if the dealer's hole card is a ten-value. It pays — $6 otherwise. A full four-deck pack has 64 tens and 144 non-tens. Assuming the deck is "randomly'* shuffled (this means that all orderings of the cards are equally probable), the chances are equally likely that each of the 205 unseen cards is the dealer's hole card. Thus the player's expectation is:

or about -$.38. The player should not take insurance.

Expectation is the amount you tend to gain or lose on average when you bet. It, however, does not explain the fluctuations from expectation that occur in actual trials.

the deviation as a percent of the action is very small. And about 68% of the time T/A is between -.001 and +.001 so as a percent of the action the result is very near the expected result of zero. Note that the average size of D, the deviation from the expected result E, grows—contrary to popular belief. However, the average size of the percentage of deviation, D/A, tends to zero, in agreement with a correct version of the "law of averages."

For $1 bets on Red at American roulette, the corresponding results appear in Table 1-2. Notice that in the last column the spread in T/A gets closer and closer to E/A = - .0526. This is where we get the statement that if you play a "long time" you'll lose about 5.26% of the total action. Note, too, in column 4 that there appears to be less and less chance of being ahead as the number of trials goes on. In fact, it can be shown that in all negative expectation games the chance of being ahead tends to zero as play continues.

Using the concept of action, we can now understand the famous "law of averages." This says, roughly, that if you make a long series of bets and record both the action (A) and your total profit or loss (T), then the fraction T/A is approximately the same as the fraction E/A where E is the total of the expected gain or loss for each bet. Many people misunderstand this "law." They think that it says the E and T are approximately the same after a long series of bets. This is false. In fact, the difference betweenE and T tends to get larger as A gets bigger.

Now, the ordinary player probably won't make a million $1 bets. But the casino probably will see that many and more. From the casino's point of view, it doesn't matter whether one player makes all the bets or whether a series of players does. In either case, its profit in the long run is assured and will be very close to 5.26% of the action. With many players, each making some of the 1,000,000 bets, some may be lucky and win, but these will generally be compensated for by others who lose more than the expected amount. For instance, if each of 10,000 players take turns making a hundred $1 bets, Table 1-2 tells us that about 68% of the time their result will be between +$4.74 and -$15.26.

All of us want to win when playing at casino, but unfortunately almost99 of casino players lose at last. Is this means that we cant win at Casino? Although its true that there is no 100 guaranteed formulas that can enable us towin at casino, but if we play smartly, we should be able to make some good money from casinos. 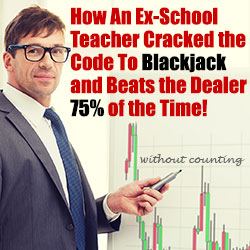