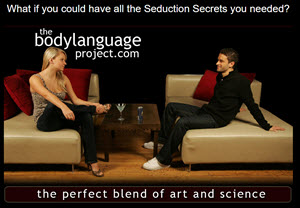 You will notice that this arm-cross gesture is characterised by the hands tightly gripping the upper arms to reinforce the position and to stop any attempt to unfold the arms and expose the body. The arms can often be gripped so tight that the fingers and knuckles turn white as the blood circulation is cut off. This arm-fold style is common to people sitting in doctors' and dentists' waiting-rooms, or first-time air travellers who are waiting for the plane to lift off. It shows a negative restrained attitude.

In a lawyer's office the prosecutor may be seen using a fists-clenched arm-cross while the defence may have taken the arm-gripping position.

Status can influence arm-folding gestures. A superior type can make his superiority felt in the presence of persons he has just met by not folding his arms. Say, for example, that at a company social function, the general manager is introduced to several new employees whom he has not met. Having greeted them with a dominant handshake, he stands at the social distance from the new employees with his hands by his side, behind his back in the superior palm-in-palm position (see Figure 44), or with one hand in his pocket. He rarely folds his arms to show the slightest hint of nervousness. Conversely, after shaking hands with the boss, the new employees take full or partial arm-fold gestures because of their apprehension about being in the presence of the company's top man. Both the general manager and the new employees feel comfortable with their respective gestures as each, is signalling his status relative to the other. But what happens when the general manager meets a young, up-and-coming executive who is also a superior type and who may even feel that he is as important as the general manager? The likely outcome is that after the two give each other a dominant handshake, the young executive will take an arm-fold gesture with both thumbs pointing vertically upwards (Figure 73). This gesture is the defensive version of both arms being held horizontally in front of the body with both thumbs up to show that the user is 'cool', a gesture characterised by Henry Winkler who played the Fonz in the television series Happy Days. The thumbs-up gesture is our way of showing that we have a self-confident attitude and the folded arms give a feeling of protection.

Sales people need to analyse why a buyer may have taken this gesture to know whether their approach is effective. If the thumbs-up gesture has come towards the end of the sales presentation and is combined with many other positive gestures used by the buyer, the sales person can move comfortably into closing the sale and asking for the order. If, on the other hand, at the close of the sale the buyer moves into the fist-clenched arm cross position (Figure 71) and has a poker face, the sales person can be inviting disastrous consequences by attempting to ask for the order. Instead it is better if he quickly goes back to his sales presentation and asks more questions to try to discover the buyer's objection. In selling, if the buyer verbalises, 'No', it can become difficult to change his decision. The ability to read body language allows you to see the negative decision before it is verbalised and gives you time to take an alternative course of action.

People who carry weapons or wear armour rarely use defensive arm-fold gestures because their weapon or armour provides sufficient body protection. Police officers who wear guns, for example, rarely fold their arms unless they are standing guard and they normally use the fist-clenched position to show quite clearly that nobody is permitted to pass where they stand.